Phil Ruthven tracks the evolution of different sectors of the Australian economy and how they contribute to our wealth.

The evolution of Australia’s economy has followed that of all developing economies over the past several centuries. The agrarian age was one in which wealth was generated through agriculture, mining and, in a supportive way, by commerce (wholesale, retail trade and transport) and banking. In Australia, this era lasted from the 1810s until the mid-1860s. The primary sector of agriculture and mining was dominant, supported by the tertiary sector (commerce).

The industrial age followed from the mid-1860s to the mid-1960s, having started some 75 to 80 years later than in England. It was an age dominated by the secondary sector made up of manufacturing, construction and utilities.

We are now in the post-industrial or infotronics age until the mid to late 2040s. This is an age dominated by the quaternary sector, including a new-age utility (information and communications technology), and consists of professional and technical services, telecommunications and media, finance, government administration and education. The quinary sector is also growing rapidly, made up of health, hospitality, recreation and other services industries. Interestingly, the most stable sector over the past two centuries has been the tertiary or commerce sector, made up of retail and wholesale trade and transport, with a fairly consistent 15 to 20 per cent share of GDP.

Figure 1 shows this evolution over the past two centuries with forecasts deep into this new century and a 10th of it already behind us. The succeeding dominance of the different sectors is clear. 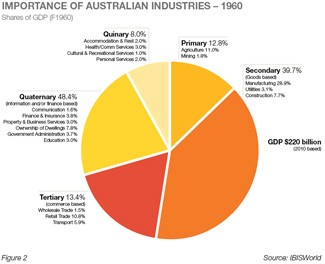 The change over the past half-century from 1960 to 2010 has been extraordinary, as Figure 2 and Figure 3 reveal. The relative demise of the secondary sector – manufacturing in particular from 29 per cent of GDP to less than a third – is sobering. Yet the stunning expansion of the quaternary sector is there for all to see: from just over a fifth of our wealth creation (GDP) to almost half! The quinary sector has made more modest gains, but is increasing in importance all the same. The primary sector has been falling in importance, but the fall would have been greater had it not been for the recent mining boom. Mining now dominates the primary sector, which agriculture did 50 years ago in 1960.

But aren’t the best-paying jobs in the older, more solid and wealth creating industries such as manufacturing, construction and agriculture? No. Many of the newer industries are more wealth creating, more exports generating and higher paying.

No one ever created a rich (democratic) country on the back of low wages. Singapore eschewed industries we thought were wealth creating but paid low wages. Lee Kuan Yew had more foresight and emphasised finance, wholesaling, transport, tourism, hi-tech industries and education. Today that country has a higher standard of living than Australia.

Figure 4 highlights the average wages in each of the nation’s five sectors, with the individual industry division wages shown in each sector. The new age’s dominant sector, the quaternary sector, is top of the ladder.

This is followed by the sector that had been dominant in the industrial age (the secondary sector). Both are ahead of the national average wage, being $67,800 in the 2010 financial year. 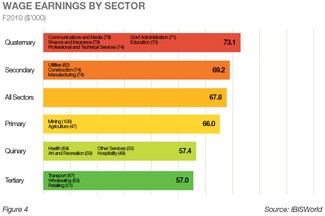 The primary sector, dominant in the agrarian age, comes in third, but thanks only to mining jobs, which are half those of agriculture but pay a whopping average of $108,000 a year compared with the paltry $47,000 to farm workers.

The quinary and tertiary sectors bring up the rear. This leads to the differences across the eight states and territories that make up Australia’s economy. They are enormous, as Figure 5 proves.

The states and territories have been staggered in order of their modernity – they have been increasingly reliant on the new-age quaternary and quinary sectors.

It should be pointed out that the mix of industries across Australia at large is very similar to other developed economies which, like our own, are in the top 10 OECD nations in standard of living (GDP/capita). 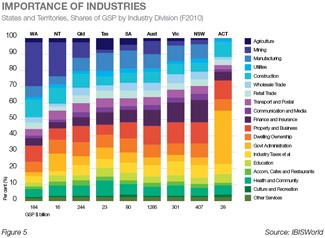 In one sense, Western Australia has an industry mix that might once have classified it as an agrarian-age economy. However, energy and minerals are part of the new age and it has these in abundance, as well as iron ore, and in boom-price conditions. This luck will run out in due course as all booms do deflate, but not for some years yet. Serendipity is a fact of life. The Northern Territory has a not dissimilar dependence on mining. Not surprisingly, WA and the NT have the highest incomes after the ACT, which has the largest quaternary sector (the highest wage-paying sector) due to the dominance of government administration.

Clearly, NSW and Victoria have mixes of industry closest to that expected of economies in an advanced stage of the infotronics age. Once again, Australia reflects the twin characteristics of modernity and luck. We are an advanced economy, replacing old and bold industries with newer, higher-paying and export-prospective ones. But the fortune of boom prices in minerals demanded by Asia – the region of the 21st century – is a bonus for the time being and some years hence.