We hear and read often these days that jobs are disappearing faster than they can be created and that we will also run out of workers later in this century due to rapid ageing. Neither are true.

Figure 1 shows where our workforce of 11.5 million men and women was employed in March this year. 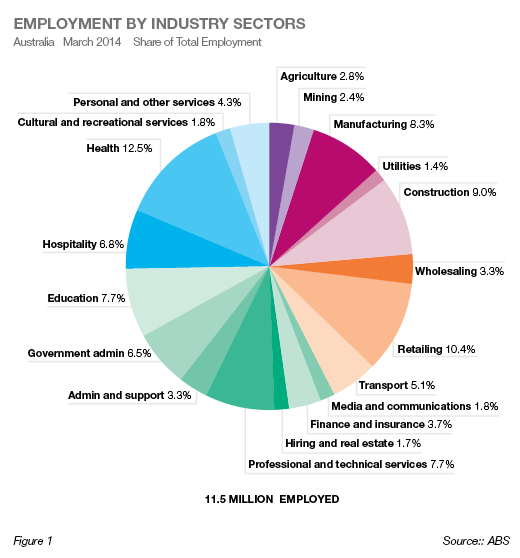 This mix bears little resemblance to that of 30 years ago, let alone 50 years ago when the industrial age was being displaced by the new age of services and information and communications technology (ICT). This should take us through to the middle of the 21st century when yet another new age should take over.

Manufacturing jobs are now 8.3 per cent, compared with double this share 30 years ago and nearly four times this share in 1960 (when this industry accounted for 30 per cent of all jobs).

On the other hand, jobs in the professional and technical services industry, at 7.7 per cent, are now double their share of 1984.

Hospitality (accommodation, fast foods and restaurants) are now nearly seven per cent of the workforce compared with under five per cent in 1984.

Our health industry is now the nation’s biggest employer at 12.5 per cent of the workforce with 1.43 million employees, compared with just 540,000 in 1984. And, if we include the other health jobs in pharmacies, pharmaceutical manufacturing and the education of doctors and other health workers, then we are looking at well over 1.5 million employees.

So yes, we are losing jobs in the traditional industries, but we always have over the past century. Nothing stands still, as they say.

However, we create more jobs in newer industries. This is abundantly clear in Figure 2 which shows that over the past five years we have created over four times as many new jobs as we have lost. So much for the silly question: Just where are the new jobs, mate?

Yes, this means the need for re-skilling, sometimes moving house to another area or even taking a lower-paid job. But more often it involves moving to a higher-paid job with far greater prospects than in the dying industry that was often kept alive with fiscal morphine (subsidies) for too long.

There seems to be some sympathy and nostalgia for once-iconic industries closing down, epitomised by the car manufacturing industry. Yet, the demand for subsidies to the workers meets with less enthusiasm. Why should less than 50,000 workers get such privileges when the others — over twice as many — don’t?

We are entering a period of reality checks in this regard. It will be beholden on workers, be they white, blue, green or grey collar workers, to take more responsibility for their own multiple career seasons in a working life these days of 50 years or more.

Figure 3 is a reminder of the new age industries that are creating jobs between 1965 and 2050. 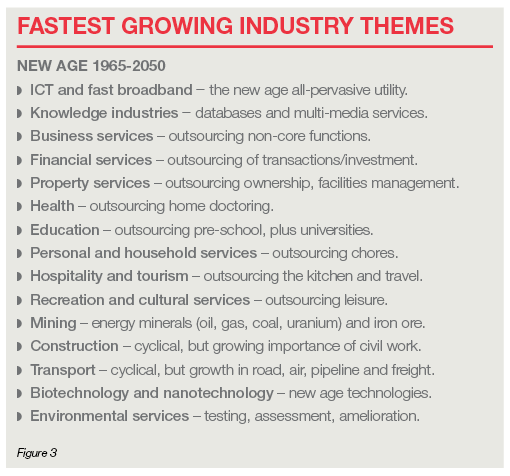 There will be over 10 million new jobs in these categories over the next four decades. Yes, nearly double the entire workforce of 2014.

Then there is the misconception that we will run out of workers due to the ageing of the population. Bunkum.
The reality is that our participation rate is rising and while this may plateau at some stage in the far future, it may also not. After all, most work is cerebral these days, not physical, and the only way to wear the brain out is to stop using it.

For those tradespeople who may be beyond physically hard work in their 60s, there are prospects to use that experience elsewhere (for example, hardware stores instead of the construction industry).

In addition, we are living much longer and healthier lives. Life expectancy is now over 80 years, and for those born in this century, it is closer to 100 years.

At the beginning of the 20th century, it was 53 years – not much over half the emerging life expectancy.

Indeed, the problem at the time of Federation in 1901 was not age but youth. Some 36 per cent of the population was under 15 years of age and banned from working under the new constitution.

Now we worry about the aged. But why should there be an ancient-cut off in the working age?

Why stop working with 15 to 35 years of life left between now and the end of this century?

No. There are too many worry-warts and well-meaning doomsayers out there.

We are not going to run out of jobs or workers this century.

The biggest threat to employment is our restrictive and regressive industrial relations regulations, an unimaginative view of where the world of new jobs are emerging and a failure to realise that the definition of “old” is going up by two to three years every decade.

Nowadays, 65 is the new 45 of the early 1930s. Our politicians, employers and employees need to understand that things are getting better, not slowly getting worse.