Safe and profitable market positioning is the only business end game, writes Phil Ruthven AM.

Successful businesses like to control their own destiny. Many factors enable this to be achieved, including focus, unique intellectual property, leadership and organisational culture (business energy, values and some quirkiness). Another critical factor is market positioning. How does a business get to a place where it can be master of its own destiny without having to constantly look over its shoulder for threatening competitors? Are there actually safe positions? The Ruthven Institute says yes, based on decades of analysis by IBISWorld of the nation’s 2000 largest businesses, which account for nearly half the nation’s $5 trillion-plus revenue.

Four positions offer safety — not impregnability. In essence, it is about dominance in the marketplace, without that being a restriction of competition, having an unfair advantage or being in an illegal situation. Quality and/or uniqueness and price must increase as an operator chooses to come down this order of size: 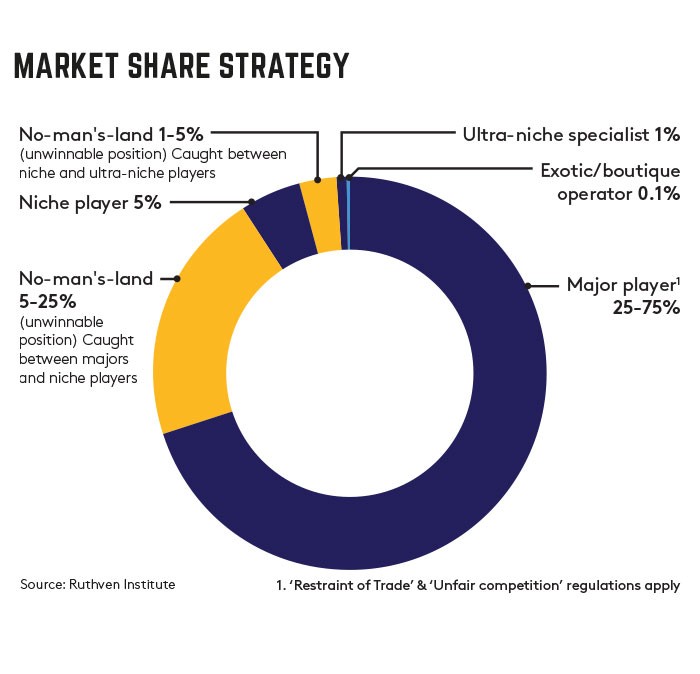 The following positions should be avoided:

If you’re in an unsafe position, your first move should be a merger (get bigger) or disaggregation into semi-autonomous niches or ultra-niches. This is more urgent when an industry or market is in the mature part of its lifecycle.

New technology has disrupted markets and while it isn’t changing the positioning rules, it’s worth a mention. For example, online retailing (Amazon, eBay, Alibaba) is often now a third iteration of department stores (after the traditional and discount eras of the past century). They start unprofitably then become ultra-niche, then niche. Online pharmacy retailers are in the discount sector along with Chemist Warehouse and others, competing on price and convenience.

Few businesses achieve world’s best practice returns on equity in Australia because more than half of them are in the wrong position to win and be profitable. The successful ones are.