2022 Young Australian of the Year Dr Daniel Nour, founder of Street Side Medics, is determined to dismantle the barriers to healthcare for people experiencing homelessness.

Daniel Nour was a final-year medical student in London when he walked out of a train station after a late shift and stopped to help a homeless man having a seizure. A crowd had gathered around him, many of them homeless, and one member of the group told Nour that her friend kept having seizures, despite never consuming alcohol or drugs.

“I asked her why no-one had taken him to see a doctor?” says Nour.

Her answer — that the healthcare system doesn’t actually care — shocked him. “As someone about to embark upon a career in medicine, it just slapped me in the face,” he says.

The encounter fired Nour’s determination to set up a service that surmounted some of the barriers that homeless people face in accessing healthcare, including cost, lack of transport, stigma and embarrassment. His successful efforts saw him receive the Young Australian of the Year award in January.

Street Side Medics — a GP-led, not-for-profit mobile medical service dedicated to the estimated 116,000 Australians experiencing homelessness — registered the organisation in Sydney in February 2020 and had its first medical van on the road in July, purchased with the assistance of a philanthropist friend. The service now operates two vans fitted out with the equipment to provide primary healthcare services, including blood tests, electrocardiogram assessment, ultrasounds and some medication.

The organisation has two employees. The vans themselves are staffed by volunteer GPs, junior doctors and others, who provide their services free of charge. Patients don’t even have to hand over a Medicare card. “They have to provide a name, but it doesn’t have to be their real one,” says Nour.

Street Side Medics ensures continuity of care by returning to the same six clinic sites — currently Woolloomooloo, Brookvale, Manly, Parramatta, Blacktown and Hornsby — at the same time every week. “Patients can return to get their results, but if there’s something abnormal [in them] then one of us will reach out,” says Nour, adding that Street Side Medics recognises patients don’t always have capacity to come to you. He says there has been some interest from vulnerable Aboriginal communities in the Northern Territory, where vandalism to bricks-and-mortar clinics has complicated the delivery of health services. Street Side Medics was also able to send immediate assistance to Lismore during the northern NSW floods in February.

Nour works full-time as a basic physician trainee and plans to pursue a career in cardiology at Sydney’s Royal North Shore Hospital. He acknowledges that while juggling multiple commitments can sometimes prove challenging, “it’s grown from a one-man crusade to a large organisation”.

In the meantime, he has been buoyed by the “hundreds” of people who volunteer their time, and the interest from medical subspecialties and allied health professionals his venture has attracted. “As doctors, we all look for opportunities to give back beyond the scope of our work,” says Nour. “The opportunity to use your skills, training and knowledge to volunteer is an opportunity a lot of doctors have appreciated and taken up.” 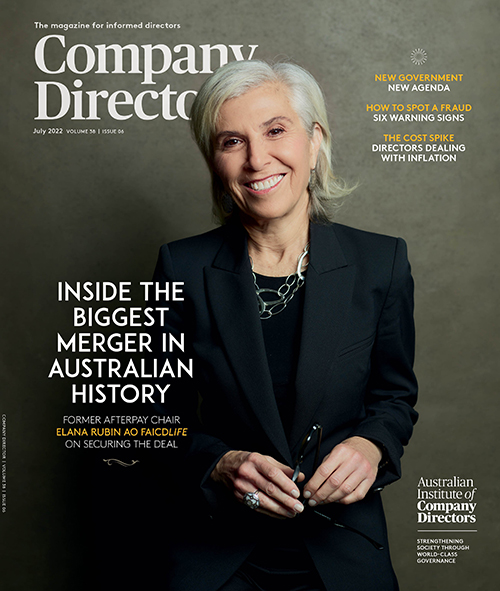 A lawyer friend introduced Street Side Medics to the pro bono practice at Clayton Utz and from that starting point, a constitution was drafted and three members, including Nour, developed a board. “This obviously gave it a lot more structure and robustness,” he says. “It wasn’t just one person with an idea. It was a group of people committed to an idea.”

Because Street Side Medics is a startup board, it is more hands-on and operational than most corporate boards. Subcommittees cover areas including clinical governance, research, education, finance and risk, providing up-to-date and relevant information to the board.

Shenouda, a general practitioner, says he joined the board on the strength of Nour’s infectious passion for the project. “Anyone would be proud to be part of a service for people who have been neglected,” he says, adding that the main early challenge was to establish the foundation for a bigger organisation. “Now it’s about making sure we have a good stream of funding that will help this organisation to develop, reach its goals and listen to volunteers on the ground.”

Nour admits ensuring the organisation grows at an appropriate rate can be challenging. “We’ve got so much potential, resources and capabilities now that it requires self-discipline not to go full steam ahead. But we want to build an organisation that lasts hundreds of years rather than one that grows so quickly and then collapses in a couple of years.”

As compared to the early days, when Nour was the sole driving force behind the organisation, he says he can now “step away for a week or a month and know that services will continue”. “It used to be 100 per cent dependent on me, but it’s now essentially 100 per cent independent of me.”

Nour also seeks to change the “homelessness is a problem we need to solve” narrative. “It’s about trying to understand the problem, trying to get a better comprehension of the challenges around it and the reasons for it, and then trying to build compassionate leaders,” he says.

Street Side Medics is reliant on donations and partner organisations, including LSH Auto (which provided the second van), Laverty Pathology, Mission Australia, HCF and Clayton Utz.

Nour still retains a hands-on role in the clinics and derives enormous rewards from the work. “It might be someone just walking by who says, ‘Do you have any dressings?’ and, when we ask why, we discover a massive leg wound that is clearly infected and needs to be debrided,” he says. “Or the woman who comes in for a blood pressure check, but reveals she’s a victim of domestic violence, so we try to support her through that. At every clinic, there’s always at least one encounter where you think: this is exactly why I’m here.”