Keep your focus on the customer, make the most of data and commit to R&D say Street Furniture Australia founders Darrel Conybeare and William Morrison.

In June, Street Furniture Australia (SFA) released the country’s first “smart” bench, which has an ergonomic design and comes with an inbuilt power supply, a wi-fi connection and a table for those ubiquitous coffee cups.

They are also designing a rubbish bin that sends council workers alerts when it’s full. Part of a six-month project in partnership with the ACT government — #WodenExperiment — to “activate” Woden Town Square in Canberra, it’s designed to help improve the use and amenity of public space.

This ties in with the global “smart cities” movement, which embraces technology to improve the liveability, productivity and sustainability of cities and towns.

Public space has an increasingly important role to play in our urbanised society, says Bill Morrison. Fewer Australians have backyards and more of us are living in apartments. With this shift, things have come full circle, he says, with a desire to remove cars from civic areas wherever possible and dedicate more space to the public — just like it was in earlier times.

Innovation has been at the heart of the SFA mission since Bill Morrison and Darrel Conybeare founded the company in 1986. The duo worked together on several Sydney projects including a redesign of Circular Quay in Sydney ahead of Australia’s Bicentennial celebrations and Homebush for the Sydney Olympics in 2000. However, their partnership dates back to 1974, when they first began working in urban design. They formed architectural practice Conybeare Morrison International (CM+) in 1980, working on such projects as the Westlink M7 motorway.

Morrison graduated with a degree in architecture from the University of Sydney in 1965, subsequently working at the Commonwealth Department of Works and the National Capital Development Commission. He then took up a position with William Holford and Partners in London — Holford being one of a small group of architects credited with the birth of postwar town planning in Britain. 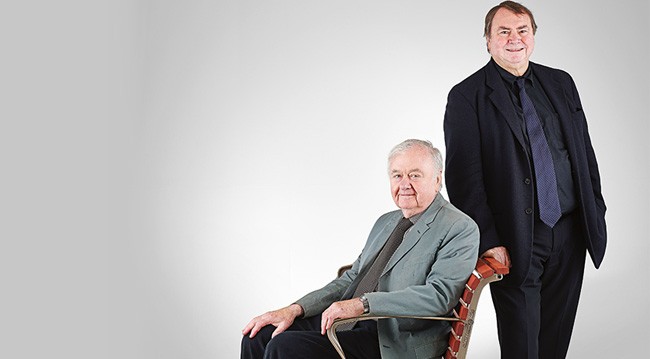 The two have different but complementary styles — with Conybeare providing much of the big-picture vision and Morrison the detailed follow-through. They pioneered the design and manufacture of street furniture in Australia at a time when such public amenities were a novelty, mostly imported from Germany and Switzerland.

“Our first seat [the Plaza] was made by one of our staff in his backyard. It was a leap of faith — we decided that yes, we might as well give it a try,” recalls Morrison.

They have been market leaders ever since. The company has 45 employees and supplies to councils, university campuses, shopping centres, property managers, transport and healthcare providers throughout Australia. Since 1986, the company has furnished more than 25,000 public places, locally and around the globe.

Although both aged in their seventies, Conybeare and Morrison are firmly focused on the future. This means further investment in manufacturing and technology to retain a competitive edge. The company actively encourages its team to pursue innovation in all aspects of its designs, says June Boxsell, the company’s head of innovation and marketing. “We are very lucky because Bill and Darrel are designers,” she says. “Design is in everything we do, and we do a lot of design research projects. Normally, in other companies, directors wouldn’t enable you to do that because it isn’t producing a short-term return on investment.”

Short lead times are essential, as all the furniture is made to order. The company’s western Sydney factory uses Toyota “lean manufacturing” principles to minimise waste — including movement, time, transport and underutilised labour.

“It’s very important to be fast,” says Conybeare. “Once you have a design, you can’t let the grass grow under your feet.”

Through that [strategic plan] process... the management team became more refined in terms of having the right people and the right fit.

“From 1986 to now has been one era,” says Morrison. “There is a new era now, with June and her team taking things forward.”

That forward planning also extends to the organisation’s governance. Two years ago, SFA set up an external advisory board to allow the pair to maintain a focus on innovation and develop a broader business perspective.

Conybeare and Morrison first engaged Anthony Moss GAICD to help the company develop a strategic plan so that it could become as forward-looking as possible.

“Through that process, the team became increasingly empowered; the management team became refined in terms of having the right people and the right fit,” says Morrison.

“The strategic planning process called for the directors to step back a little to give the senior management team a greater sense of authority and responsibility. The team had to step up and interact as a group of managers. In the process, it became obvious if there was a poor fit and the team developed to become a refined and coordinated unit,” he says.

“As that developed, it became logical to create an overarching board structure. It meant that Darrel and I stepped back a little bit and made the bigger decisions, while empowering the management teams to manage the business and bring forward any problems as the need arose. We are designers; our profession is not business management, so it’s very good to have professional business managers guiding us.”

Anthony Moss says their ongoing commitment to innovation is what sets them apart. “They have taken on a leadership position within their industry niche and they have achieved this through their willingness to fund innovation across all aspects of their business — in terms of design, processes, technology and manufacturing capability.”

As part of succession planning, their wives, Leith Conybeare and Elizabeth Morrison, have joined the advisory board, which is chaired by Moss.

“One of the opportunities for an advisory board is to assist the directors on developing a broader perspective around the potential of their organisation to identify its blind spots. It also gives them confidence about where they want to put their focus and effort. An advisory board can assist in that process of rigour — whether it’s an investment or a strategic decision.”

Data in the detail

The use of data obtained from smart technology in public amenities will help local government and property managers to better utilise their assets. For example, rather than having rubbish bins overflowing or park benches in little-used locations, sensors will detect how frequently an object is used so that it can be moved if necessary.

The company is finalising an eBin management app, which monitors the gradual filling of rubbish bins and can send alerts to property managers when it needs to be emptied.

Among a number of partnerships, SFA recently became an industry partner in a project involving the University of New South Wales and Georges River Council. Over a six-month period, the Smart Social Spaces Project will gather data from the company’s smart furniture.

Georges River Council will use this data to inform its decision on where to place its furniture, how often to maintain it, and identify where more amenities are needed.

The data is focused on how many people use the facilities — where, when, and for how long — and not on obtaining personal information. However, Boxsell acknowledges that the recent breach of trust by Facebook with the Cambridge Analytica scandal has created additional scepticism and suspicion within the broader community.

“It’s not about tracking names — it’s tracking numbers. It’s about using the numbers to make a more informed decision to create a better environment,” says Boxsell.

The company also recently partnered with the University of Technology Sydney, with a TechVoucher grant from the NSW Department of Industry, to investigate additive manufacturing, which uses 3D printing.

“Printing our parts to order will be a game changer,” says Boxsell. “There is a while to go, but we’re investigating the financial model and seeing how viable it will be.”

One downside of a leadership position is that many smaller operators imitate their SFA products and undercut on price. Australian intellectual property laws provide little protection, as furniture cannot be patented, only design-registered for a period of 10 years. SFA products are built to last for 20 years.

“Copying happens in all walks of life,” says Conybeare. “The way to stay ahead is to keep bringing out new designs.”

He adds that another advantage of developing smart furniture is that it’s much harder to copy. The company is currently looking into the possibility of exporting its new range of products to overseas markets.

Mutual respect has provided the foundation. We have our ups and downs, but in the end there is a strong common uniformity of purpose.

“What we’re doing is world-leading,” says Boxsell. “We have international competitors, but our competitive advantage is that we create user-centred designs. Everything we do is about elevating the public space experience — we’re not using technology for technology’s sake.”

When asked the secret to their successful partnership, Conybeare told Outdoor Design Source: “Mutual respect has provided the foundation. We have our ups and downs, but in the end there is a strong common uniformity of purpose.

Over the years, we’ve built a good team and this is the backbone of the practice — not any single person, nor any single purpose.”

“The longevity of our partnership is based on this, on mutual respect and the fact that we never argue and always work toward common goals,” added Morrison.