The 2019 KPMG AICD directors survey marks an important shift in priorities to customers and employees.

The banking Royal Commission, which grilled chairs, CEOs and senior executives over their treatment of customers, had an impact on the thinking of directors even before the recommendations from Commissioner Kenneth Hayne AC QC were released.

The KPMG-AICD survey of 612 directors, Creating Value and Balancing Stakeholder Needs: The board’s role, was conducted last December after a year dominated by headlines of poor treatment of customers by financial institutions.

The survey, two months before the recommendations from Commissioner Hayne, covered directors at ASX-listed, private, not-for-profit and public sector entities. The results show directors now put customers ahead of even shareholders, the traditional big-ticket stakeholders and the people directors represent on the board. The directors rated customers and clients as the “most significant” stakeholders (360 out of the 612 respondents).

Employees ranked next, with 234 respondents rating them as “most significant”. Both these groups had an average rating of eight out of nine. Shareholders and institutional investors, government and regulators, and the local community were behind, averaging a rating of six out of nine.

The latest survey reinforces the findings of a separate KPMG poll of CEOs last year. “The conversation in boardrooms is changing and decisions are already being made through the lens of what the community will think,” says KPMG chair Alison Kitchen MAICD.

“After 12 months of the Royal Commission and what it exposed, perhaps it is not surprising that the survey showed treating customers well is top of mind for directors. Restoring trust was not identified as a specific answer in this survey, but it seems to have permeated other issues, such as keeping customers and employees satisfied.” 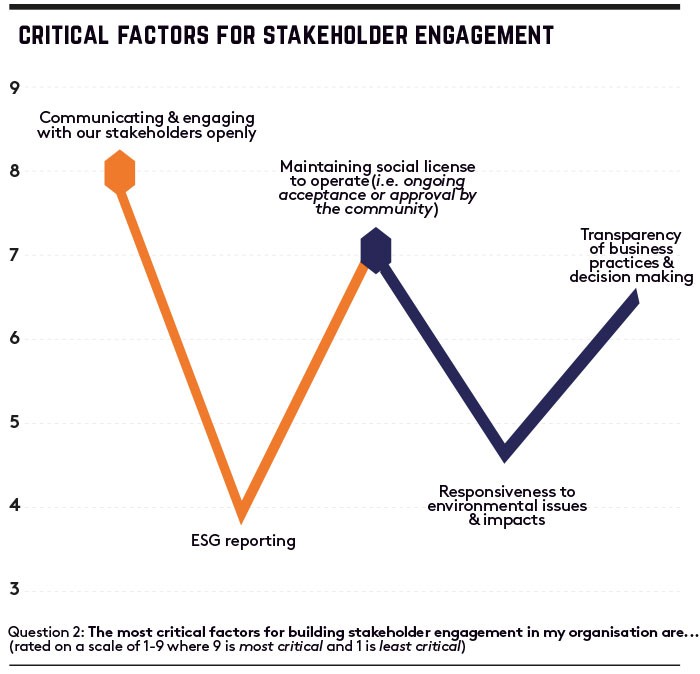 This switch in focus to customers from shareholders is being played out in Australian boardrooms. Asked about the most critical factors for stakeholder engagement, directors rated “communicating and engaging with stakeholders openly” as the most significant. Next came “transparency of business practices and decision-making”, and “maintaining social licence to operate”. Responsiveness to environmental issues rated poorly while the least critical factor for building stakeholder engagement was environmental, social and governance (ESG).

Many directors pointed out that “getting it right” with customers and employees is critical to maintaining the organisation’s ability to operate, and to ensure financial performance and ongoing viability. Looking ahead, directors were most concerned about excessive regulation and director liability and accountability. Younger directors (aged 34 and under) are more passionate about the potential impact of cybersecurity, innovation and disruption, digital transformation, cost competitiveness and the workforce of the future. The nearest group to the younger directors in sharing those views are those 75 and over.

Comments from directors highlighted critical factors for stakeholder engagement, such as delivering on strategy and objectives, quality of service to customers, and meeting stakeholder targets and expectations. The board’s role in culture was emphasised by Commissioner Hayne, saying directors should measure and monitor culture and governance, identify problems, rectify those problems, and then determine that the problems have been rectified.

"The conversation in boardrooms is changing and decisions are already being made through the lens of what the community will think.

A crucial part of a director’s role is to hold management to account. About half of those surveyed felt they had access to all the information and tools needed to challenge management on issues. However, 35 per cent of directors were less confident in the information that the board was receiving, and whether it was enough to encourage rigorous debate. 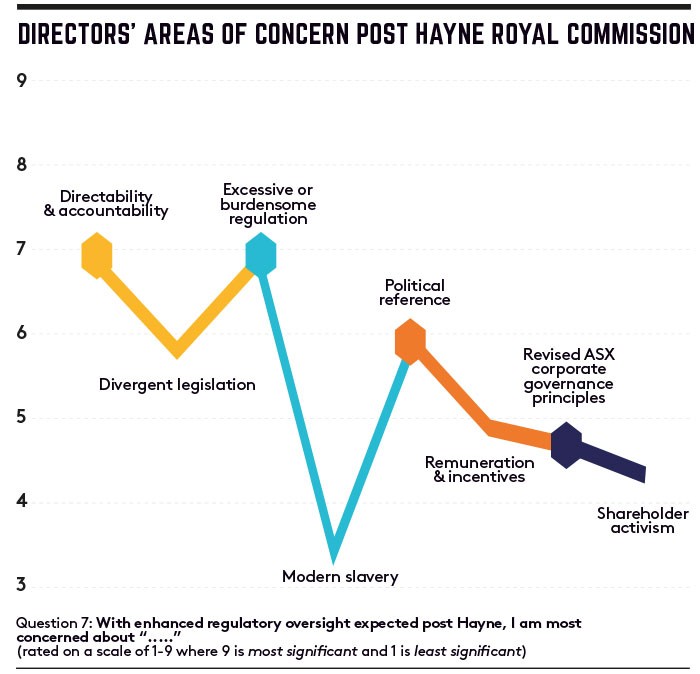 The Hayne report noted that boards cannot operate without the right information. Most (60 per cent) of the directors surveyed felt relatively confident their organisations were able to simultaneously deal with, and possibly mitigate, past mistakes while also focusing on plans for future growth and investment.

The AICD’s managing director and CEO Angus Armour FAICD says the survey shows directors are looking to create value and balance different stakeholder priorities. “Seeing company culture feature as a priority for directors in this survey, alongside recognition of employees as a priority stakeholder group, is telling,” he says. “Boards should consider how they can communicate a clear sense of purpose that engages employees through alignment to their personal values. The broader community and customers are also increasingly looking to business to demonstrate a sense of purpose and values.”

The AICD, drawing on insights from the survey and interactions with directors and business leaders over the past 12 months, says boards should: