What NFP boards need to know about mergers

Not-for-profit entities will be looking to mergers to help manage the challenges ahead, but the complexities of coming together and combining cultures could work against them.

NFP mergers may have been off the boil in 2020, however directors surveyed in the AICD’s Not-for-Profit Governance and Performance Study 2020, released late last year, were of the view that both mergers and winding-up discussions will resume once government stimulus measures such as the JobKeeper subsidy scheme come to an end in 2021. Of those surveyed, only three per cent of directors reported they were undertaking a merger, down from five per cent in 2019; while 21 per cent said they were currently discussing a merger. And there appears to be an increased likelihood of the merger actually happening, with 30 per cent of respondents rating the likelihood of a merger as 50 per cent or higher.

According to the Australian Charities and Not-for-profits Commission, there were 245 charity mergers last year.

“There are some NFPs out there that are going to have some substantial challenges this year — and mergers or takeovers could be a way to manage them,” says Tom Forde, CEO of Tanarra Philanthropic Advisors, a pro bono adviser to charities.

CEO of Playgroup Australia Verity Hawkins GAICD, formerly CEO of Life Education Australia and chief merger officer at YWCA Australia, is still seeing entities exploring mergers. She says these tend to be smaller mergers or one organisation folding into another. Looking ahead, she expects this to continue instead of the “big bang” mergers we’ve seen in the past. “Mergers are really hard work,” says Hawkins. “A lot of goodwill has to go into a merger just to get that conversation started — and all the stars have to align for it to really go ahead.”

Mergers also take a lot of time. Lisa Kingman, director of collaboration and impact at Tanarra Philanthropic Advisors, describes the merger process as, “18 months of trial and error and getting to know each other”. “Mergers take up the time of the leadership, staff and those involved on the legal and accounting side,” she says. “A lot of time is spent on meetings with the beneficiaries, funders, corporates and government — and just getting the boards together on a regular basis beyond the board’s normal requirements.”

The demands on time don’t stop once the documents are signed. There’s also the operational transition. “It takes time to iron out the intricacies of the entities coming together,” says Hawkins, adding that the process of merging eight member associations into YWCA Australia, which began in 2018, is still in progress. “It takes a good two years or more.”

“Once the legal work is done, you’re probably only a third of the way through the process of building the culture,” says former Disability Discrimination Commissioner Graeme Innes AM GAICD, who was involved the merger of three large organisations into Vision Australia. It took Vision Australia three or four years to build its culture, says Innes, who is chair of Attitude Foundation and a director of Life Without Barriers.

“A merger also requires some bravery and courage,” says Forde. “Traditionally, a lot of NFP directors are quite conservative in nature around risk. There are certainly a lot of risks associated around a merger. A lot of things can go wrong, but it can be a fantastic success, too.”

There are many reasons why merger talks start, but often it’s because of financial distress. That was what prompted the merger between Down Syndrome South Australia (DSSA) and Orana Australia. “Through casual discussions over 12 months with the DSSA CEO, it was established that DSSA was experiencing significant financial problems and needed to find a suitable partner,” says Nicholas Mihalaras, CEO of disability support group.

“DSSA offered a range of programs that provided a lot of potential for Orana to expand its range of educational or developmental programs for people with intellectual disabilities,” he says. “It also offered a revenue stream outside of the National Disability Insurance Scheme.”

Forde believes there’s strong case for charities, particularly smaller ones, to consider merging. “Running a NFP these days is more expensive than it used to be because you have to invest in data security and have a digital infrastructure,” he says. “If each organisation has to subscribe to technology and create digital capacity in the organisation, there’s a lot of duplication. There’s also more competition for funds so you have to spend more money to raise money. Unfortunately, philanthropy is not growing fast enough in Australia and the next 12 months are going to be quite challenging.”

Forde says it’s the same with sophisticated philanthropist, high-net-worth individuals (HNWI) and foundations. “They want to have an impact — and that is harder to do with a small charity.”

For Innes, purpose has to be the main driver of a NFP merger. “If the purpose isn’t shared, the merger won’t succeed,” he says.

Purpose was the key reason that two state-based organisations merged into EdConnect Australia, a process in which Kingman was involved. “We found each other by complete fluke,” she says. “We were doing almost identical things — placing retirees into schools as volunteers. We developed a working relationship with each other and shared our knowledge and experience. We then realised that if we combined the two entities, we could potentially have a national organisation that would have more impact because we could combine our dual expertise. In Victoria and NSW, we had great connections with corporates and philanthropists, while the West Australian group had a very strong connection with government. We could learn from each other.”

From her research, RMIT University professor Nava Subramaniam has found that the primary benefits of NFP mergers can be scale efficiencies, an improved financial position, a wider revenue base, increased market size, the provision of a wider range of services and the ability to acquire critical technological and human expertise.

“In some cases, the merger meant an opportunity to rationalise service offerings, close low-demand services and remove operational inefficiencies,” says Subramaniam, who is deputy dean of research and innovation at RMIT’s School of Accounting, Information Systems and Supply Chain.

“The secondary benefits are perceived advantages derived from the primary benefits, which include enhanced reputation, being competitive in the market, improved capacity to win larger grants, and to have stronger social impact,” she says. “Interestingly, some managers reported ‘rescuing another organisation’ from closing down to be a major reason for their merger.” 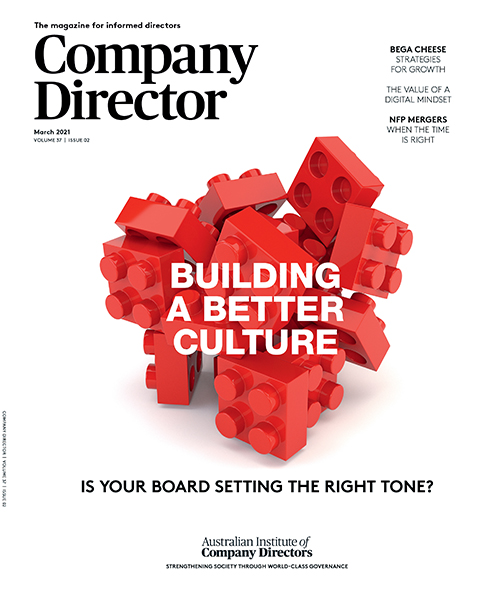 But despite these benefits, there are many hurdles to overcome in a merger. Kingman says a big one is ego. “That’s especially if you have two CEOs who are a bit precious about their roles,” she says. “It’s the same with directors. They need to be able to agree upfront on how they will work together. But in my experience, things can work themselves out. After the first 12 months of the EdConnect merger, those who couldn’t cope with the changes, including the personalities and culture, removed themselves from the organisation. It was almost like a natural selection process.”

Forde believes a big obstacle is resistance to change. “It might not be about people losing their jobs,” he says. “It might be about fulfilling the mission in a different way to how they have done it in the past.”

For Kingman, culture can also stymie a merger. “Everyone can agree on the legal requirements, finances, compliance and governance, but it’s not until you dig into the weeds that you realise that the cultural environment can be radically different, for example, in the working environment, expectations, management style, processes and the general vibe of the organisation.”

To avoid this issue, Kingman advises having a 12-month trial period before legally joining the dots. “Kick it off with some really good independent facilitation between the two boards where they can unpack all their strategic challenges and successes, and talk about the why,” says Kingman. “Why do they think it’s going to be better to join together? What can they do better for their beneficiaries that they can’t do on their own?”

She notes that branding, such as agreeing on a name for the merged entity, can also be a challenge — as can the fear of losing an organisation’s heritage. “In the case of EdConnect Australia, we agreed as part of the merger to have a whole history of the organisation permanently published on the website of the new entity,” says Kingman. “It explains who the two entities were and how they started.”

Innes says he received some good advice when he started on the Vision Australia merger: The decisions you leave to the last are who the CEO will be and where the head office will be located. “These are the decisions that most people focus on, but really, in the scheme of things, they are not the important ones,” he says. “What you want to get right first are the purpose, strategy and intent — the reasons you are merging. A lot of those other decisions will actually fall out through the process as the trust develops.”

Forde adds that if a merger is too intense, there are alternative structures to consider. “Maybe it’s just doing a co-branded or co-managed program,” he says. “Or maybe it’s as simple as sharing an office with an entity that does something similar. You can start with dipping your toe in the water to see how it goes. But be brave. Don’t be afraid to have that first exploratory conversation, because you might be pleasantly surprised. See where it takes you. If it doesn’t work out, that’s fine. At least you tried. You might get some lessons out of it that will make both entities more effective without doing a merger.”