Directors have had to deal with increasingly proactive shareholders this annual general meeting season. Ben Power wraps up the key themes.

Are annual general meetings still worthwhile, particularly in the digital era? This was one of the main topics of discussion between Frank Cooper AO FAICD, a director of Woodside Petroleum and South32, and Graham Bradley AM FAICD, chair of HSBC Australia at the Essential Director Update in Perth in November.

“It’s the preparation that directors make to ensure they are prepared to answer the questions that is the real value,” Bradley told the audience. “How do we answer to our shareholders? It’s a constant question directors should be asking.”

Certainly, 2017 has seen shareholder meetings roar back to life as boards responded to intense questioning from investors and proxy advisers and sought better engagement with their shareholders and the community.

“This year, shareholders have been prepared to show more muscle around directors with a history of poor performance,” says Judith Fox MAICD, chief executive of the Australian Shareholders’ Association (ASA).

“Shareholders have worked out that directors can make a difference for good and ill,” says Martin Lawrence from proxy advisory firm Ownership Matters. “If you realise that they do make a difference, then your vote is valuable.”

AGMs are also evolving to adapt to this new era. Most large listed companies now livestream their AGMs, Link Group held a hybrid AGM — a traditional AGM that allows shareholders to attend and vote either physically or online. Fellow registry Computershare also held a virtual meeting in November.

“Many listed companies will be watching to see how it goes,” says Fox, adding that the ASA’s hybrid AGM in May had twice as many members online as were in the room. 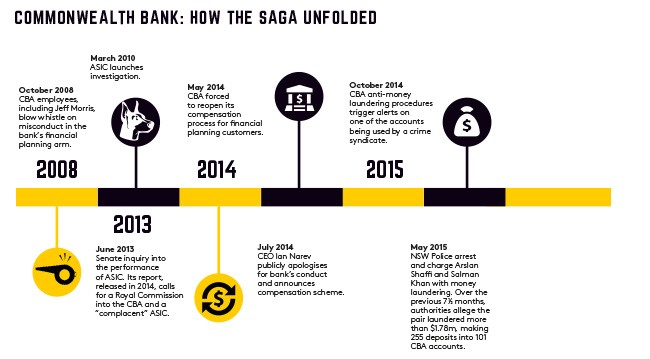 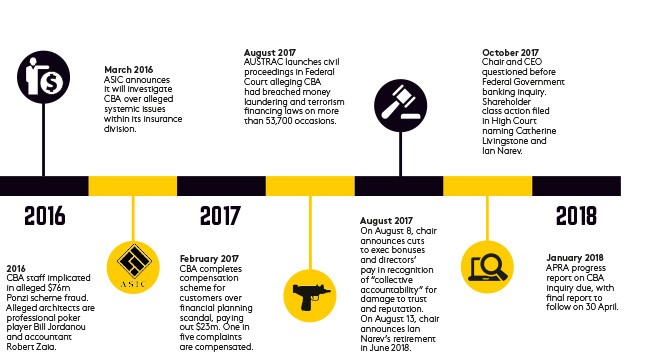 Director accountability: the rise of the “no” vote

Directors of ASX-listed companies have traditionally received about 96 per cent of votes in favour of their election. This year, more shareholders have been prepared to take a stand and vote “no” if companies are underperforming.

The directors of Healthscope, Tabcorp, Carsales.com and Bega Cheese all had significant no votes, but one of the most high-profile backlashes occurred at logistics company Brambles, with 25 per cent of shareholders opposing the re-election of veteran chair Stephen Johns (see table, page 20).

Investors were angry at the decline in the share price — down 30 per cent since July. The company also faces a potential class action relating to its January profit downgrade.

Directors need to understand that shareholders are sending a message, says Fox. That is, “be our agents”. While it’s almost impossible to be voted off an Australian board, Lawrence describes the rise in no votes as a “next step” in shareholders asserting their rights.

Voting against directors raises a number of critical issues, says Daniel Smith, general manager at proxy adviser CGI Glass Lewis. “To what extent do we hold directors accountable for actions of management? How does the board manage these issues and what sort of narrative do they send to the broader shareholder community?”

As flagged by Company Director in November, the 2017 AGM season has seen increased scrutiny of boards on the level of diversity, both gender and the composition of skill sets on boards, including the appointment of directors with relevant digital, industry and demographic experience.

Gender has become a “proxy” for board performance, says Fox. “If the board’s missing [the importance of diversity], what else are they missing?”

This AGM season the Australian Council of Superannuation Investors (ACSI) recommended its members vote against male directors at ASX 200 companies with all-male boards. It identified 12 ASX 200 companies without female directors, including Flight Centre, TPG and CIMIC Group (formerly Leighton Holdings). CIMIC has since appointed Kate Spargo to its board, while Flight Centre announced the appointment of Colette Garnsey in November.

The AICD is advocating for ASX 200 boards to have a minimum of 30 per cent female directors by the end of 2018. The gender diversity issue is “starting to get some teeth to it”, says Smith, who thinks boards just need to accept that it makes good business sense. 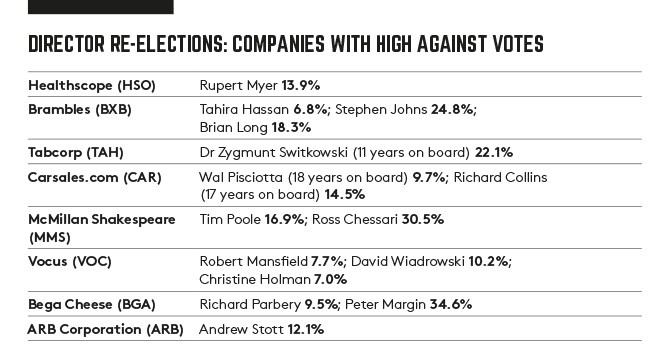 The levels and models of executive remuneration have become a perennial AGM issue.

Gene Tilbrook FAICD, a director of Woodside Petroleum says the model of remuneration is starting to change and he expects this to continue over the next two to three years.

One major trend has been the emergence of hybrid variable remuneration plans from companies including QBE, Perpetual and Wesfarmers — 2017 has been the first year that shareholders have voted on the plans.

Hybrid remuneration frameworks (which combine bonus and long-term equity incentives and put them in play over a much longer period) help boards address shareholder preferences for longer-term incentive measures, but also allow them to avoid scrutiny of annual bonuses, says Michael Chandler, the director of corporate governance at Morrow Sodali.

Boards need to consider whether the link between pay and performance can be simply explained and why it is right for their organisation, says PwC partner Emma Grogan. “Where there’s a clear narrative about why it’s right for us, we see a lot more support from shareholders,” she says.

Environmental finance group Market Forces filed three resolutions calling for Origin Energy to improve planning, disclosure and measurement around climate change and emissions. It also put a resolution to the Commonwealth Bank seeking to embed climate-change risk management into its constitution. The Australasian Centre for Corporate Responsibility lodged a proposal around human rights in its operations and supply chain.

The release of reporting requirements, particularly on climate change, is helping to drive the resolutions. One resolution called for Origin Energy to implement the recommendations of the Financial Stability Board’s Task Force on Climate-related Financial Disclosures (TCFD), which was published in June. However, big shareholders failed to back the resolutions, no proxy adviser groups supported the activist resolutions and the proposals were soundly defeated because shareholders understood the need to comply with standards such as the TCFD, says Chandler.