The ongoing impact of bushfires on the Australian economy

Economics and society and sustainability Health and community

Australia's bushfire season has caused catastrophic damage, but the economic cost of natural disasters could be less harmful if government investment in building resilience is made a priority.

The social and environmental costs of Australia’s summer bushfires have been devastating, and while narrow economic costs are likely to be modest in comparison, they will still be significant, going well beyond the implications for GDP growth. One starting point for estimating the cost of natural disasters is insurance losses — around $1.8 billion in the case of the 2009 Black Saturday fires, for example, and $2.5b for the 1983 Ash Wednesday fires. In mid-January, the Insurance Council of Australia estimated bushfire-related insurance losses since November 2019 at around $1.3b — these are expected to increase substantially.

Insured losses are only part of the picture. Comprehensive estimates include tangible costs — direct costs such as damage to private property and public infrastructure, insured or not; and indirect costs including disruptions to economic activity leading to lost wages and profits — plus intangible costs associated with deaths, injuries and damage to social wellbeing and the natural environment.

Intangible costs are much harder to gauge than tangible ones, but work by Deloitte Access Economics for the Australian Business Roundtable for Disaster Resilience and Safer Communities suggests they can be at least as large. In the case of Black Saturday, Deloitte estimates insured costs were only about 48 per cent of all tangible costs; while tangible costs accounted for just 44 per cent of overall costs. Hence, insurance costs serve as a very low-end estimate of the likely total cost of the current disaster.

Total costs are likely to be substantial, but the same isn’t necessarily true for the impact on measured GDP growth. That’s largely because GDP can’t capture many of the intangible costs involved. It’s also because previous natural disaster experiences suggest activity often tends to recover quite quickly, as the short-term disruption to growth is followed by a positive impact from rebuilding. This doesn’t account for opportunity costs whereby resources devoted to reconstruction are unavailable to be deployed elsewhere. And it doesn’t allow for the risk of outsized adverse effects on national business and consumer confidence, or the possible productivity sapping effects of air pollution.

Despite debate over how to interpret the data, there’s evidence the frequency and costs of natural disasters, including severe weather events, is rising worldwide. Several factors explain this. First, a mechanical relationship between the size of losses and a more populous, wealthier world economy — more and wealthier people imply larger economic losses from a disaster. Second, people appear to have been taking on increasing rates of disaster risk in terms of where they choose to live, work and invest. 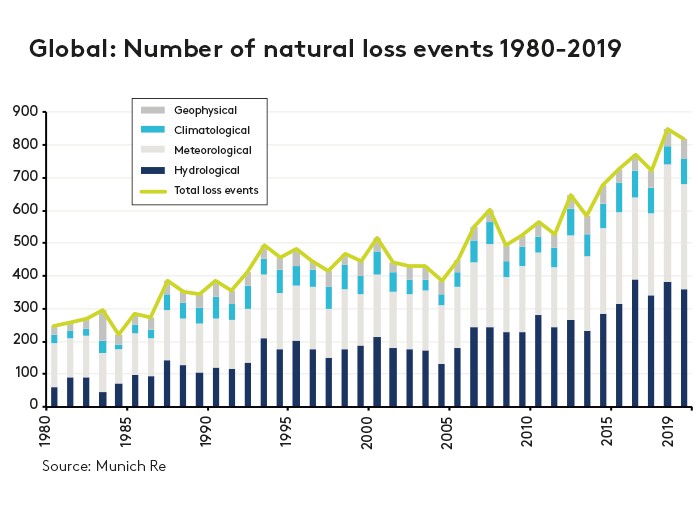 This rise in risk-taking could reflect market failures such as inadequate or costly information, moral hazard and externalities, and behavioural biases such as skewed risk perceptions. It may also be a straightforward product of rational decisions to locate in higher-productivity, but also higher-risk areas. For example, investments in human and physical capital may be more productive in coastal areas with lower transport costs and greater urbanisation, even though those areas are more likely to be flood-prone. Third, climate change appears to be increasing the frequency and intensity of natural disasters, while also altering their geographical distribution.

This suggests Australia could profitably invest more in disaster mitigation. In 2014, the Productivity Commission found Australian governments tended to “overinvest in post-disaster reconstruction and underinvest in mitigation that would limit the impact of natural disasters in the first place”, noting that government mitigation spending was then running at only about “three per cent of post-disaster expenditure in recent years”.

Economics and society and sustainability Health and community