Risks ahead for the global economy

Economics and society and sustainability On a more positive note, the IMF expects global growth to pick up through the second half of 2019 and reach a somewhat more robust 3.6 per cent in 2020.

But this optimism is heavily qualified by warnings that the balance of risks remains “skewed to the downside”, with the IMF citing trade tensions, downside risks in systemic economies and financial vulnerabilities along with medium- and long-term risks including “pervasive effects of climate change and a decline in trust with regard to establishment institutions and political parties”.

It’s certainly true that the past few months have given global economy watchers plenty to ponder. Trade negotiations between Washington and Beijing, and between Washington and Brussels, the seemingly never-ending saga of Brexit, China’s ongoing efforts to balance financial stability concerns with a desire to stimulate its economy, and shifting risk assessments by the US Federal Reserve Bank and the European Central Bank have all seen measures of global policy uncertainty — which finished last year at record highs — remain at uncomfortable levels.

While these developments will be important in determining the near-term outlook, what about the medium term? For its part, the IMF sees global growth beyond 2020 plateauing at about 3.6 per cent. In advanced economies, the organisation assumes growth will be pulled down by structural headwinds including weak productivity (where the IMF view is that digitalisation and automation are having only a modest impact on productivity despite delivering larger consumer welfare benefits) and slower labour force growth, reflecting population ageing. In emerging markets, the IMF expects growth to stabilise, with China’s growth slowing to 5.5 per cent by 2024 while that of India is expected to run at just under 7.75 per cent.

At first glance, there’s an apparent paradox here, with the IMF anticipating both a slowdown in growth across many major economies and a stabilisation in global growth. However, there is a composition effect at work: a rebalancing in relative weights in the global economy — towards faster-growing emerging markets — serves to prop up the overall global growth. 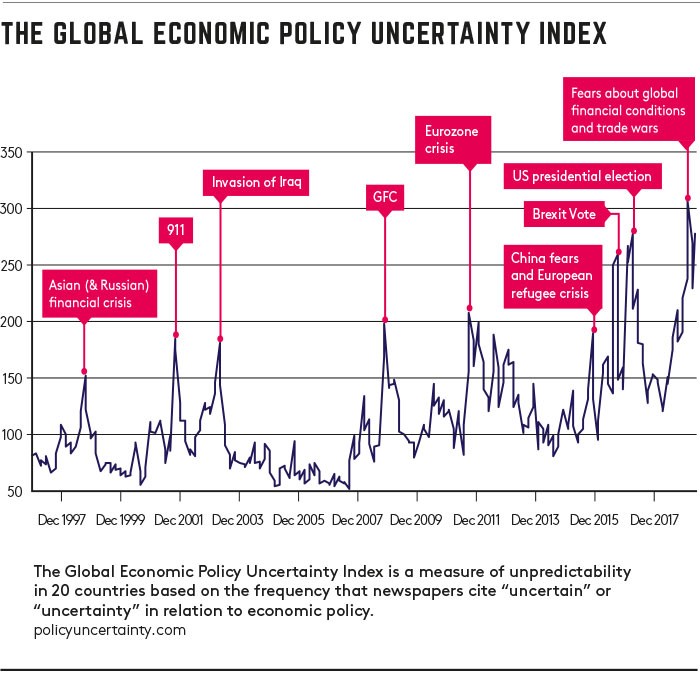 That rebalancing reflects a major tectonic shift in the landscape of the world economy. It is a product of economic convergence (or catch-up growth), whereby faster growth in emerging markets and developing economies, compared to growth in advanced economies, has transformed the balance of economic power.

This is also a relatively recent phenomenon. Through the 1980s and 1990s, there was little to separate the growth performance of these two groups, with somewhat faster average growth in the emerging world often offset by greater volatility. However, after the turn of the century, emerging markets — led by China — enjoyed a sustained period of significant growth out-performance.

By 2008, the share of emerging market and developing economies in world GDP was larger than that of the advanced economies for the first time in modern economic history. And while the pace of convergence has slowed markedly since the global financial crisis, the growth gap has still been large enough to see that share continue to rise. The IMF now reckons that by 2024, emerging markets and developing economies will account for about 63 per cent of world GDP, up from just 43 per cent in 2000.

A second key factor contributing to the medium-term outlook is the waxing and waning of globalisation in general, and of the pace of growth in world trade in particular.

During the 19 years between 1990 and 2008, the world economy experienced a period of “hyper-globalisation”, which saw the share of trade in world output rise from just under 39 per cent to more than 60 per cent. That increase of about 21 percentage points was a pronounced acceleration relative to an increase in the same ratio of about 12 percentage points during the previous 19 years associated with a more leisurely pace of globalisation. It also (partially) overlaps with the period of rapid convergence described above, with world trade serving as one important engine of catch-up growth.

Since the global financial crisis, however, trade growth has slowed and the ratio of trade to GDP flatlined. While annual growth in world trade volumes averaged almost seven per cent between 2000 and 2008, that fell to around five per cent between 2010 and 2018, and the IMF expects growth to average less than four per cent between 2020 and 2024.

That slowdown in global trade is likely to be a headwind both for international productivity performance and for the pace of catch-up growth. Which brings us neatly back to the short-term outlook where we started.

Not only are current growth prospects hostage to trade policy developments, but the ultimate outcomes of the trade disputes between Washington, Beijing and Brussels will have significant consequences for the world economy’s medium-term trajectory.

Economics and society and sustainability