Why you need to be aware of the manufacturing decline

The decline of manufacturing – and concurrent rise of the service sector – are inevitable, and directors should pay heed, writes Phil Ruthven AM.

Many involved in manufacturing in Western nations despair at its gradual decline as a percentage of their nation’s employment and GDP. They see this as a portent to declining living standards. This group was, in part, responsible for Donald Trump’s election and it is to them he feels indebted. His striking back at China (and other trading partners) by introducing tariffs is one example of his aim to prevent the “decimation of entire communities”. This follows continuing massive US trade deficits with China, in particular.

The US is not alone in having its traditional manufacturing base hollowed out by consumer saturation in the developed economies, and imports from China and other Asian nations. Can a modern economy increase the living standard of its inhabitants with a relative or actual decline in its manufacturing?

There are distinct parallels with the decline of agriculture. The 18th-century philosopher and economist Thomas Malthus got it wrong when he said agricultural production could not keep pace with population growth — as did the “Club of Rome” in the 1970s. Agriculture more than kept up, but now only takes a fraction of our jobs and GDP to do so — less than three per cent of GDP in Australia and under one per cent in the US.

So, what about manufacturing? Australia, like many Western countries since WWII, has seen its manufacturing expand and then contract. Manufacturing peaked at nearly 30 per cent of GDP in 1960 under a blanket of tariffs, quotas and subsidies, before being dismantled and replaced by free trade in the 1980s. Manufacturing has declined to less than six per cent of GDP, yet the Australian standard of living has soared threefold since 1960.

Manufacturing jobs in Australia and the US are poorly paid. Wages are below the national average in Australia, and very low in some US manufacturing sectors, except where it has better economies of scale than Australia. Emerging countries, with low wages are almost impossible to beat, no matter how good productivity growth is, and jobs are outsourced for good reason — cost. Even China is now looking to outsource manufacturing elsewhere in Asia and Africa. From 2013, Australian jobs lost in manufacturing have migrated mostly to health and aged care. In the US, manufacturing is down to about 11 per cent of GDP and to expect it to return to even 10 per cent of GDP in Australia is unrealistic. Australia will see more medium-sized enterprises — including high-tech/3D technology, continued value adding of minerals, and custom manufacturing (where import/transport costs and time cannot compete). However, this won’t mean an increased share of GDP. 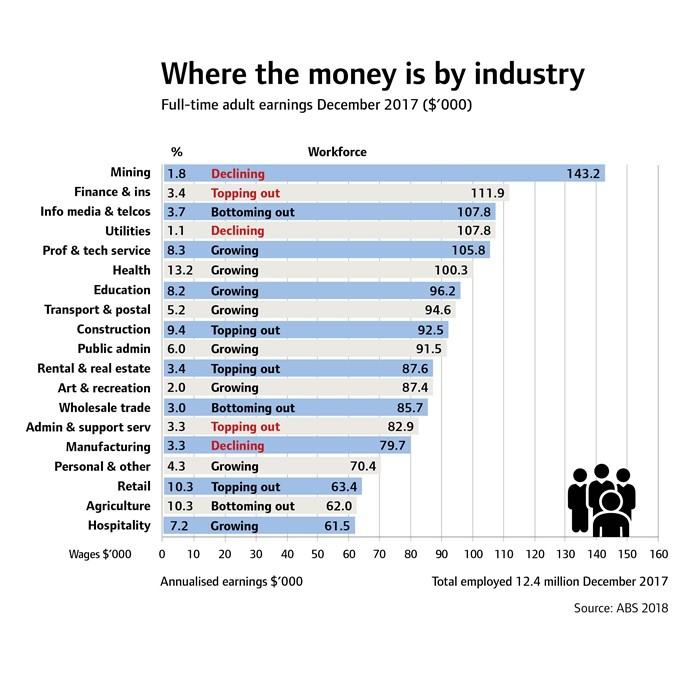 And there’s no future in applying tariffs to protect manufacturing jobs. The US introduction of tariffs on a range of manufactured goods, such as steel and aluminium, may give rise to growth in US jobs in the short term, but it will lead to longer-term pain in terms of lower living standards and a loss of jobs in other industries where trading partners have retaliated.

A services-orientated economy has a great advantage — services have a short life. They don’t need to be put into stock (raw/finished goods) and are mostly “consumed” once produced. This enables an economy to grow more quickly, as without stock there is no need to carry passive assets. Further, the money exchanged from the time of production to consumption is much quicker, so there is a multiplier effect. You pay for breakfast in the morning, the waiter spends it visiting a doctor, the GP pays to get his lawn mown, and the gardener goes to the cinema that night. Try making and selling goods four times in a day. To mourn the passing of manufacturing is unnecessary and regressive.