As the major parties sharpen their election 2022 narratives, the battle will be for the centre, but directors, keen for action on long-term policy challenges, have their doubts.

With the election rapidly approaching, directors are keen to hear policy debate around some of the important long-term issues raised in the AICD’s recent Director Sentiment Index. Most recently, the rapid spread of the Omicron variant threatens further public health and economic turmoil. But experts say this is shaping to be an election contested on character, record and values.

“I would like to think the election will be fought on policy issues, but I doubt this will be the case, says Carol Austin FAICD, a director of State Super and HSBC Bank Australia. “I suspect there will be a lot of scaremongering and mudslinging, but it has always been thus.”

Dr Angela Jackson, lead economist at Equity Economics, who has worked in the federal bureaucracy and as a political staffer, also believes policy issues are likely to be sidelined. “It’s going to be around character and broader values,” she says. “It certainly doesn’t present the same level of interest from a policy perspective as the last election where there were much bigger differences between the two parties. What you’ll probably see is the Liberal Party trying to claim it’s the better economic manager and a steady ship. The Labor Party will try to say, ‘We’re just the same and also a steady ship’. The policy differences will be kept pretty minimal and there won’t be a lot that’s contentious.”

Kate Crowley, associate professor of public and environmental policy at the University of Tasmania, believes the Coalition will try to hit the security, economics and pandemic policy buttons as their positives. “Labor is very strong on infrastructure, climate, education and health,” she says. “Both will need to appeal to centrist voters on policy while attempting to rein in the extremes, and both will need to both retain and expand their supporters. This will complicate their policy pitches. The fracturing on the right of politics is of particular concern to the government especially when its moderate Liberals are demanding moderate, not extremist, policies. This may prove to be a real Achilles heel.”

Jackson believes skills shortages will be an important battleground and expects the major parties to have substantial skills packages wrapped within the skilled migration debate. She says Labor has come out with childcare policies and free TAFE. “I would expect to see something in this space from the government, especially around skills.”

She says migration will be an issue. “The government indicates it will return to the status quo before the pandemic, while Labor is suggesting it might tighten things and make it harder for skilled migrants. That might make hiring senior executives and talent more difficult in the medium term and could be a risk boards need to manage.”

However, CEO of the Australian Chamber of Commerce and Industry Andrew McKellar believes the issue of migration could be sidestepped by the major parties. “In the context of the forthcoming election campaign, we’re seeing caution being exhibited by both the government and opposition. We understand the reasons and politics for that, but the reality is that migration has delivered very significant economic benefits to Australia over a long time. That hasn’t changed.”

When it comes to skills and labour shortages, McKellar believes directors will be watching out for measures such as a strong investment in vocational education and training. “That’s TAFE and non- TAFE type,” he says. “It could support the stronger uptake of apprenticeships. Programs like Boosting Apprenticeship Commencements [wage subsidy] have been important and we think those sorts of programs will need to be continued.”

To make it more attractive for people to come back into the workforce, McKellar would like to see a family-friendly agenda that includes more support for childcare and employment services such as Jobactive. He says employment services are particularly important for younger people. “If they’ve experienced a period of unemployment, you want to ensure they don’’t get sucked into a long- term dependence on income support — that they are able to remain connected.” 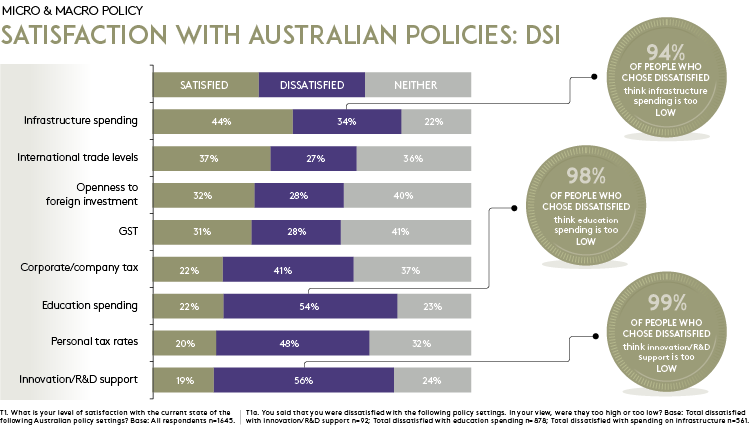 “One of the positive things we’ve seen in the past couple of months is that there is now at least a bipartisan commitment from the major parties around climate change and meeting the net-zero emission target by 2050,” says McKellar. “So, we’ve hopefully seen a ceasefire in the climate wars that have crippled Australian political debate for a decade. Obviously, there are differences in the plans the government and opposition have put forward. But business has broadly backed a more ambitious agenda. This is an area where business has moved substantially in the past five or six years. Before that, business was probably more reticent about the risks and costs of policies that were designed to drive action. What has changed is that business understands the risks of inaction are actually much more costly than committing to a more active agenda in this space.”

He says primary climate concerns for directors include governance and disclosure of climate risk, the cost of capital to government and business borrowers, and the opportunities for investment created by renewable economies. Unlike in the last federal election, Jackson doesn’t really expect a huge difference in taxation policy between the two parties.

“There might be some concerns around the scheduled tax cuts and their affordability,” she says. “Both parties have committed to quite significant statutory tax cuts, which will make the deficit worse.”

If they do proceed with the tax cuts, Jackson says elevated inflation could also become an issue, one directors haven’t had to manage for a long time. “They may be dusting off some of those textbooks and thinking about how they manage risks around price setting and other issues.”

McKellar would like to see taxation initiatives that boost business investment, which he says has been a bit soft in the past couple of quarters. For example, the instant asset write-off has been an important support for business investment, and companies would like it extended further. McKellar would also like to see measures such as an investment allowance and the small business company tax rate extended to cover medium-sized business, but says that he’d be surprised if there was a strong focus during the run-up to election on a timetable to consolidate fiscal policies and reduce government debt.

“We’re still in the phase where the economy is reopening and key sectors of the economy are still getting back on their feet,” says McKellar. “That is still going to be the case through at least the first half of next year. I’d have thought the debate in the election campaign context is going to be around the agenda for reopening.”

At an AICD roundtable in December 2021, company directors identified the items at the top of their wishlists for Australian policy and politics in 2022.

“An attitude of a bit more cooperation between the states and the federal government would go a long way to supporting and keeping the country on a sound footing. We need to have a decent focus on housing affordability, which has really come to the fore during the past two years. The other piece that really deserves attention is education. All of our universities are actually heavily dependent on offshore students and that’s been a big issue in the past couple of years.”

“I’d like to see a lot more bipartisan support at the political level and that goes between the federal government and the state governments. The thing I worry about — and I guess this is my legal background — is that we’ve seen a splintering for the first time in about 120 years of our federation. We had one of the most remarkable federations globally in the way that we were structured and I think we started to see the splintering occur during the bushfires where there seemed to be a standoff between the federal and state governments about just how to manage it.”

“[Also] on my wishlist is structural reform in relation to issues impacting women. We have to get women into the workforce, we’ve got to deal with childcare, and we’ve also got to deal with the massive inequalities that women face in our tax system and superannuation system.”

“We’ve all mentioned that we’re concerned about labour shortages, we’ve got lots of parts of our economy that we’re just not supplying the workers to out of university. But if we could get women into work, and to stay in work, and to help them financially around parenting and running a job and a family, that goes to the bottom line. You get women back into the workforce, it’s accretive to the GDP.”

“One is around immigration. We have to deal with that in terms of understanding the importance of immigration to the long-term economic growth of Australia and all the things that flow from that.”

“If I look in a particular area relevant to Lendlease, the complexity and time taken in our planning environment at state levels, the economic growth we’re going to need through development and the like is impeded by the time it takes to get things done. That’s putting us at a competitive disadvantage globally in terms of our attractiveness for global capital into real estate development.”

“But by and large, what I’m hopeful for is more of a long- term political discourse around vision and policies.”

It’s shameful we’re still talking about women’s participation in the workforce — about childcare and the need to address that issue for both working parents. The solution is staring us in the face. We know what the positive economic impact of that is, and wouldn’t it be wonderful if this election actually delivered significant reforms in that area?”

“[Another focus is] how we rapidly accelerate the skills tat we need for the new economy. We’ve seen that through the pandemic. My background is in digital, so one of the most exciting things to came out of the pandemic was how the uptake of digital really accelerated in the business community and personally — and what that meant. But we’re seeing massive skill shortages in this area.”