What has happened to Australia's economic growth?

International Economics and society and sustainability

Though affected by the global economy, Australia's slow economic growth is a result of weak productivity and a reluctance to invest, says AICD chief economist Mark Thirlwell.

Growth out performance has been a key part of Australia’s recent economic story. We’ve just racked up a record 112 quarters of recession-free expansion. And, partly as a result, we’ve also grown faster than most of our peers. Between 2000 and 2018, Australian real GDP grew at an average annual rate of around three per cent. That was around a full percentage point faster than the average rate enjoyed by both the IMF’s category of advanced economies and the OECD member average.

Public investment could save the Australian economy

However, Australian growth isn’t what it was. From 2000 to the onset of the global financial crisis (GFC), the nation averaged annual real GDP growth of comfortably more than three per cent, while in per capita terms growth ran at around two per cent. Post-GFC, like most of the developed world, we have slowed with growth averaging closer to 2.5 per cent, or around one per cent in per capita terms.

Recently, we’ve been doing markedly worse than that. Growth slumped to just 1.4 per cent in the second quarter of 2019 for a second consecutive quarter of sub-two per cent growth — the weakest outcome since the GFC-hit September quarter of 2009. Moreover, strip out population growth and GDP per capita fell by 0.2 per cent over the year. Likewise, growth for FY2018–19 was just 1.9 per cent. That’s below the federal Budget 2018–19’s forecast of three per cent growth, below the 2019–20 downward-adjusted forecast of 2.25 per cent, and below Treasury’s estimate of potential growth of 2.75 per cent. Take out population growth and GDP grew by a meagre 0.3 per cent in per capita terms.

So, what’s happened to economic growth? The explanation involves a mix of domestic and international factors, with a significant share of our Australian slowdown being part of a broader global narrative of waning economic dynamism, albeit overlaid with our own local characteristics and timing. At the same time, a significant part of the recent story has been weakness in private sector demand, only partially offset by growth in public spending and a strong contribution from exports.

Household consumption, the single largest component of expenditure, has played a leading role here. An uncomfortable combination of soft wage growth, sluggish non-wage income growth and a rising tax take has squeezed incomes, forcing households to compress their savings rate to sustain spending. Adverse balance sheet positions have further exacerbated the squeeze as a record high household debt-to-income ratio has encouraged households to curb spending. Until recently, the impact of this debt overhang has been compounded by a negative wealth effect generated by falling house prices.

Lower interest rates, tax refunds and a stabilising house market promise to deliver some relief for households for the remainder of this year and into 2020, but whether that will be enough to reboot consumer spending without a further dose of policy stimulus remains to be seen. For now, the betting is that the RBA will be required to deliver additional rate cuts to jump start activity. And the central bank has been transparent about its desire for additional help from fiscal policy to help get the economy back up to speed.

Beyond consumers, private investment has also struggled. Unsurprisingly, falling house prices have triggered a sharp downturn in dwelling investment. But business investment has also been weak. In part, that’s been a largely unavoidable legacy of the mining investment boom, and there have been encouraging signs that the post-boom adjustment process is nearing completion. At the same time, non-mining business investment as a share of GDP is currently close to multi-decade lows. A subdued household sector and the consequent slowdown in economic activity is likely one of the drivers here, with firms responding to a lower expected growth trajectory by scaling back capital spending plans. Another factor could be the impact of the prevailing high levels of global economic policy uncertainty triggered by trade conflicts, Brexit and the rise of populist policies and politics worldwide. Certainly, there is evidence this environment has taken a toll on investment and industrial activity across the global economy — and Australian immunity seems unlikely. Add the additional layer of business uncertainty around the consequences of disruptive technological progress and it’s understandable that some firms are more inclined to return funds to shareholders than make expensive investment bets on a deeply unpredictable economic outlook.

Finally, the economy’s current disappointing growth performance is also reflective of a sustained period of lacklustre productivity growth. The rate of growth in labour productivity has been sliding since 2011–12, slowing to a crawl (just 0.3 per cent) in 2017–18 and then contracting by 0.1 per cent in 2018–19. 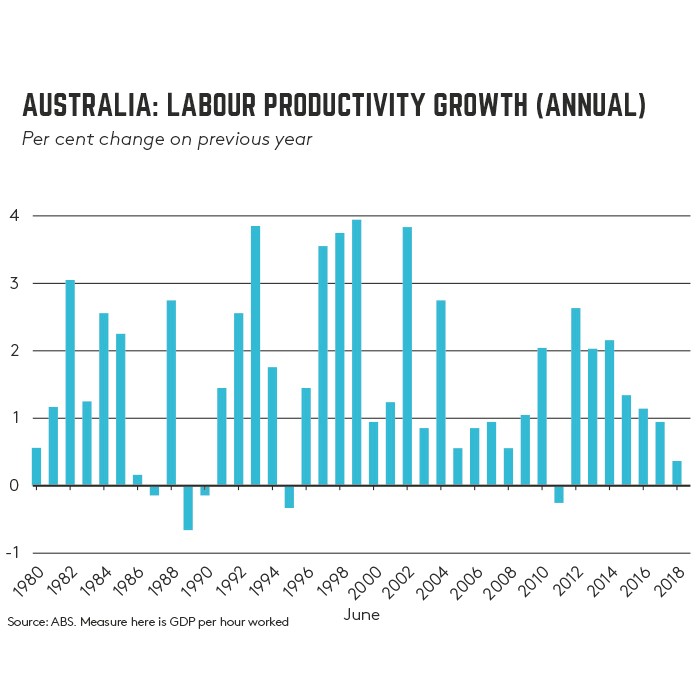 Traditionally, Australia has relied quite heavily on a rise in the ratio of capital to labour to drive labour productivity growth. But weak investment has seen growth in economy-wide capital input use fall to less than half its historical average, with the Productivity Commission highlighting “capital shallowing” — a fall in the capital-labour ratio — in 2017–18. Growth in the other driver of labour productivity, so-called multifactor productivity, has also been weak, indicating a more general loss of dynamism. For much of the 2000s, Australia enjoyed a degree of productivity outperformance relative to many other advanced economies, powered by relatively higher investment rates. That surge has now faded — and Australia’s experience has not been unique, with a general downturn in productivity growth unfolding across much of the developed world.

While the current growth slowdown is a product of global forces as well as domestic conditions, that in no way absolves domestic policy from needing to respond. Rather, it increases the pressure on policymakers to conjure the right mix of fiscal, monetary and structural policy initiatives to again fire up the Australian growth engine. It does, however, complicate their task.