Jobs growth is the key to fiscal strategy The labour market has been central to the economic story of COVID-19. Initially, the story was all about the magnitude of the damage done and the dramatic scale of the policy response. Subsequently, trends in employment and joblessness are serving as a guide both to the rate of economic recovery and the likely future trajectory of fiscal and monetary policy. Start with the damage. Between February and May last year, the pandemic, the resultant voluntary changes in public behaviour and the government-mandated lockdowns combined to trigger collapses in employment and hours worked, plus a jump in joblessness. These were some of the most vivid indicators of the economic and social harm wreaked by the coronavirus.

As of February 2020, there were about 13 million employed Australians (on a seasonally adjusted basis) plus a bit less than 700,000 unemployed, giving a total labour force of about 13.7 million. Monthly hours worked were 1762.5 million, the employment to population ratio was 62.6 per cent, and the participation rate 65.9 per cent.

After the pandemic hit, employment had slumped by almost 900,000 by last May, falling to just 12.1 million. The number of unemployed had jumped by 226,000 to more than 927,000, and in excess of 600,000 Australians had left the labour market altogether, shrinking the size of the labour force to around 13 million. The participation rate had fallen to 62.6 per cent, the employment to population ratio was just 58.2 per cent and hours worked had plummeted to only 1592 million. And while the number of employed Australians had started to grow again by June, the unemployment rate kept rising until July.

This huge labour market shock was also accompanied by an unprecedented policy response in the form of the JobKeeper program. At an estimated cost of $83b by the start of February this year (and still rising), JobKeeper is the single largest economic support program ever introduced by an Australian federal government. And it has been successful: according to RBA research, in its first iteration alone, it helped reduce total employment losses by at least 700,000. JobKeeper 1.0 was announced on 30 March 2020 and ran until 27 September, providing support to about 3.6 million workers and one million businesses. It was then extended in modified form (JobKeeper 2.0), from 28 September 2020 to 28 March 2021.

By December 2020, improved economic conditions and new eligibility criteria meant that the number of Australians on JobKeeper 2.0 had fallen to 1.5 million. As a share of the pre-COVID workforce, JobKeeper 1.0 supported an astonishing 29 per cent of the workforce, falling to 13 per cent during the first three months of JobKeeper 2.0. 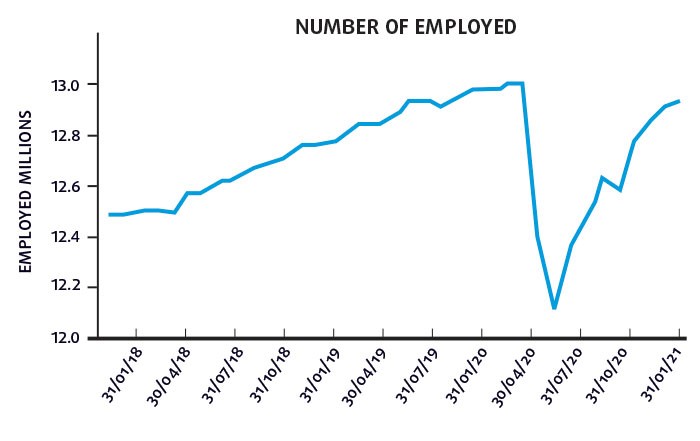 The latest chapter in the labour market story has been the rapid turnaround in employment and unemployment with a job market recovery to date that has been surprisingly quick, especially after taking into account the Victorian lockdown that ran through a large part of the second half of 2020 inevitably meant that that state lagged behind the rest of the nation’s recovery.

By January 2021, total employment had recovered to be “only” around 64,000 lower than it had been in February 2020. The labour force was more than 118,000 larger, the participation rate had climbed to near record highs, and the employment to population ratio had risen to 61.9 per cent. Monthly hours worked at the start of 2021 stood at 1667.2 million, well up on last July, albeit pulled down by an unusually large number of Australians taking January holidays. Despite the progress, there were still 182,000 more unemployed than pre-pandemic, and with the underemployment rate at 8.1 per cent, excess capacity in the labour market remains troublingly high. The composition of the job market recovery — with part-time work coming back faster than full-time, for example — is not without its issues.

Even so, and keeping those qualifications in mind, the turnaround has been impressive — particularly if benchmarked against the gradual declines in joblessness that have sometimes followed past recessions. After peaking at 7.5 per cent in July 2020, the unemployment rate has dropped from seven per cent in October to 6.8 per cent in November, 6.6 per cent in December and 6.4 per cent in January 2021 — about six months for the unemployment rate to decline by more than a percentage point. By comparison, it took about 16 months to deliver a similar decline from a peak unemployment rate of 11.2 per cent in December 1992, after the early 1990s recession. The early 1980s and global financial crisis recessions saw faster declines in joblessness, but the current performance to date has still been superior. 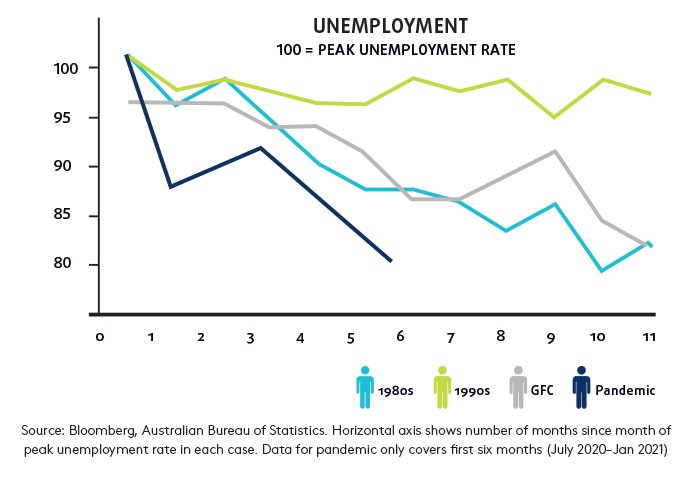 The pandemic has also forged a close link between the labour market and the future macro policy stance. Treasurer Josh Frydenberg has explicitly linked fiscal strategy to job market health, promising in his budget speech that the government’s focus would not shift from providing economic support to stabilising debt as a share of the economy until “the unemployment rate is on a clear path back to pre-crisis levels, comfortably below six per cent”. More recently, with regard to the targeted unemployment rate, he explained, “Our thinking still remains comfortably below six per cent, and is around 5.25 per cent, or around 5.5 per cent.”

Likewise, the Reserve Bank’s future monetary policy stance is also conditional on labour market outcomes. The statement accompanying the February 2021 monetary policy meeting pledged: “The board will not increase the cash rate until actual inflation is sustainably within the two to three per cent target range. For this to occur, wages growth will have to be materially higher than it is currently. This will require significant gains in employment and a return to a tight labour market.” That message was repeated in a speech by Governor Philip Lowe the following day, and again in the February Statement on Monetary Policy released at the end of that week.

With unemployment and wage growth still some distance from meeting these criteria, both arms of macro policy look set to remain supportive for some time yet, despite the recovery seen to date.