Behind the surprising success of the Humpty Doo's barramundi farm

Driving south-east of Darwin, halfway to Kakadu National Park, you can see the remnants of the Humpty Doo Rice Project. The big-thinking 1950s dream to create a thriving regional food bowl on the floodplains of the Adelaide River failed, yet it left an enduring legacy of roads and channel infrastructure.

Today, the abandoned rice fields and channels are home to Australia’s largest producer of saltwater barramundi, Humpty Doo Barramundi, owned and run by the Richards family.

Since 1993, the award-winning aquaculture farm has been doing some big thinking of its own. It supplies about 3600 tonnes of barramundi a year to customers such as Woolworths, Qantas and Costco, and exports to overseas markets.

A large female barramundi can produce 32 million eggs in a season.

All are born male, then turn into females when 3–4 years old.

It takes 24 months to grow from 2mm–5mm larvae to harvest.

With the help of $28.7m matched funding from the federal government’s Northern Australia Infrastructure Facility (NAIF), it is in the midst of a five-year, $58m expansion. The project will include development of hatchery and nursery facilities and the NT’s first automatic fish feed and storage facility. It will improve its already strong environmental credentials with a four-megawatt solar farm, and expand training and employment opportunities. The plan is to quadruple production over five years.

Owner and managing director Bob Richards has a background in agricultural science and environmental consulting. He became involved in the fledgling farm in 1993, initially as a passive investor. “We came into an industry in its emerging years and didn’t know much, so we took the best advice we could locally,” he says.

Owner and CEO Dan Richards, Bob’s son, recalls spending weekends harvesting and processing a few kilos of fish for his father and stepmother to sell at the back doors of Darwin restaurants. “There was a lean-to and a guy in a caravan covered in flies, but there were fish in the ponds and we were hooked,” he says. “It was tough. We didn’t have any money and not much knowledge of the business. There are war stories about keeping fish alive long enough to sell.”

Gradually, the original shareholders sold out and then Bob quit his job. Attending the 1999 World Aquaculture conference in Sydney, he learned about systems and design thinking. In 2002, a Churchill fellowship allowed him to investigate leading aquaculture projects around the world. He became convinced that the concept of developing a man-made saltwater wetlands system to support fish growth was a winner. 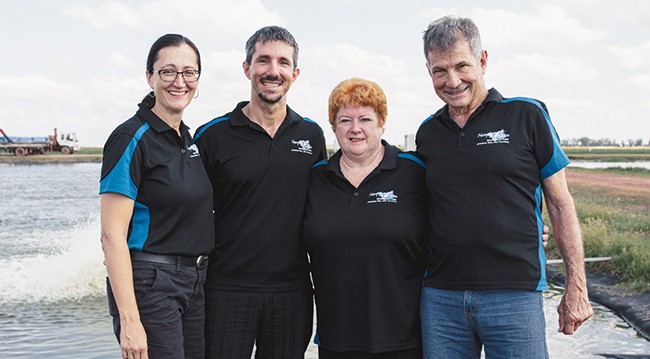 Down by the river

The 750ha farm sits by the tidal section of the Adelaide River. Its original sheds are still there, but fences now keep the crocodiles at bay. Saltwater is pumped from the river during the long tropical dry season, then recycled again and again into broad, shallow dams before being filtered through wetland vegetation in a closed-water recirculation system. Fingerlings are now bred from their own hatchery operation and grown in tanks before moving into the bigger ponds. There is a nursery and a genetics program in partnership with the CSIRO.

The business has invested heavily in research and development. Bob helped pioneer an acoustic feeding system and hand-sorting has given way to a state-of-the-art sorting and packing facility with a custom-designed chiller room. A modified US technique is used to pump the fish out of the water. They are quickly and humanely killed by being pumped into an ice slurry before being sorted then shipped to markets.

Bob Richards was recognised with the 2019 NT Seafood Industry Ambassador Award. He has his own version of Maslow’s Hierarchy of Needs.

The fifth-generation Territory family includes Bob and his wife, Julii Tyson, sons Dan and Jim, Dan’s wife, Tarun Richards AAICD, and Jim’s wife Leanne Taylor. Tarun is brand manager, and chief operating officer Tracey Leo coordinates the farm team and operations. Long-time team member Peter Fisher is farm manager overseeing infrastructure. The company has a workforce of 90 employees, ranging in age from 18 to 72. About 17 per cent are Indigenous and there are several staff from Myanmar, East Timor and Indonesia. Dan estimates another 150 people are involved in supporting industries such as freight, trades and heavy machinery, contributing more than $10m to the local economy. The NAIF loan will provide opportunities for long-term employment and training for more than 100 full-time employees in the NT aquaculture industry until 2022.

Humpty Doo Barramundi has worked hard on team-building and aligning its activities with its brand. Team leaders meet weekly, outlining plans for the week ahead and assessing the resources they will need.

The thinking of this ecosystem goes beyond the closed wetlands system to the local economy. Dan says it’s been based on relationships — development contracts for the site have been based on handshakes. “If people can’t rely on you, then you can’t rely on them,” he says.

When it comes to reliability, the company walks the walk. During recent floods, it flew 80 tonnes of fish out to market by helicopter to ensure it met its contracts. “Dad always says there’s no point in having good marketing if you don’t have a consistent supply of high-quality products. We’ve built a model that can scale and grow — and national relationships we can sell through.” 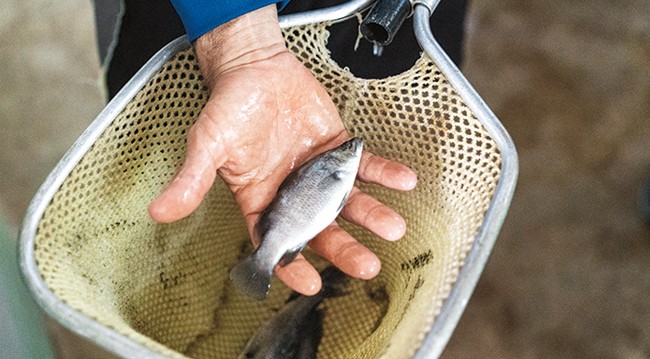 Evolution of a product

In 2016, Dan took up a Nuffield Scholarship and travelled to countries including Norway and Ireland for insights on industry growth. With global consumption of aquaculture overtaking wild-caught seafood for the first time in 2015, he was keen to see how Australia could seize the market opportunity to position its barramundi as a premium aquaculture species — the white-fish equivalent to the widely consumed Atlantic Salmon.

“I came back with a lot of concepts and started rolling that out,” he says. “It’s been an evolutionary process of getting something happening, improving on it then finding the next thing — evolution versus revolution.”

Most barramundi sold in Australia are imported from Asia. Dan has become an advocate for country-of-origin labelling. “In Australia, we don’t do a great job of labelling our fish,” he says. “Ninety per cent of Australians think they’re eating Australian barramundi, despite the majority of barramundi that is consumed domestically actually being imported. We’re doing what we can to change that.”

The Northern Australia Infrastructure Facility (NAIF) is a $5b lending facility that stimulates investment in northern infrastructure projects. It was established by the Abbott government in 2015.

To date, $1.93b has been committed in investment decisions and conditional approvals for 17 projects, which are forecast to create more than 4600 jobs and return $4.6b in public benefit.

A number of family members are small shareholders in the company while Dan and Bob are directors. They’ve recently been through a process of ensuring their structures and governance are suited for future growth, taking advice from former NT Auditor-General Iain Summers. Tarun is doing the AICD Company Directors Course in Darwin later in April. “It’s about having the appropriate governance level for where you are — and not too far ahead of where you want to be in the future. It’s like training wheels,” says Dan, adding they will probably move towards a more formal board. “As we get bigger, we have to have different structures in place. Public perceptions also change — from being a battler to being aware of having a social licence.”

The NAIF loan has enabled Bob and Dan to keep Humpty Doo Barramundi Farm in the family — without the need for private equity or foreign investment. “Historically, we haven’t been able to borrow money for any price — the industry was viewed as too risky,” he says.

Now the dream of being a world-leading farmed barra producer is gaining credibility and momentum. The company has participated in ANZ Business Growth Program at the Australian Centre for Business Growth, University of South Australia, delivered by Dr Jana Matthews, ANZ chair in business growth at UniSA.

“Our purpose is to produce beautiful barramundi while showing care for our community, our people, our environment and our partners,” says Dan.