Over recent weeks, close to 500 AICD members provided initial feedback to the AICD on the implementation of a Director Identification Number (DIN). We sought this input through two on-line surveys sent to approximately 3000 members.

AICD sought this feedback to assist the AICD respond to a Treasury consultation on Modernising Business Registers, which included a section on the implementation of DINs in Australia. This response was submitted to Treasury on 17 August 2018 and can be accessed here.

The AICD submission supported the introduction of DINs. We recognise that the effective implementation of DINs will make it easier for regulators and other stakeholders to track the corporate history of individual directors and further support targeted anti-phoenixing measures, while offering an opportunity to address security and privacy concerns at the same time.

While the AICD recognises that the vast majority of Australia’s 2.5 million directors govern their companies with integrity and accountability, fraudulent phoenix activity by a small number of people hurts the economy, employees and creditors.

We have highlighted to Government that information confidentiality and security issues will be of paramount importance in implementing a DIN, and this will need further consultation and consideration.

Further, the AICD strongly recommends that the Government should prioritise the removal of personal director information from the public register simultaneously with the introduction of DINs due to identity theft, security and privacy concerns. We highlighted in our submission the progress made in both the United Kingdom and New Zealand on these fronts. New Zealand is currently ahead of Australia in proposals to implement a DIN, while the UK requires far less personal information than Australia following reforms in October 2015. The table below sets out the comparative approach:

Note 1 - A company director can apply to ASIC to have their residential address suppressed on the public database, and in its place use an alternative address. This can be undertaken in cases of personal safety through a ‘silent enrolment’ from the Australian Electoral Office.

When we asked directors in Australia what DIN related data should be made publicly available on a register, we received the following responses: 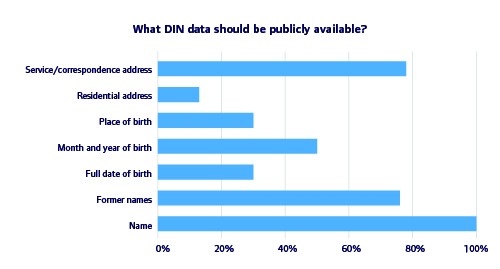 Questioning directors on the method they would prefer in applying for a DIN, 93% of directors that answered our surveys are comfortable with an on-line application process, as long as it is a simple process. 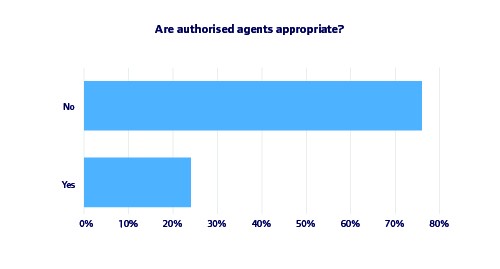 The implementation of DINs is a significant undertaking by the Government and will require further consultation with impacted parties as well as consideration of linked reforms (such as those to address illegal phoenixing). The AICD is likely to require further member input as part of future consultation on DIN implementation as the impact on our membership will be significant.

The AICD is working closely with Treasury around the proposed reforms and will be strongly advocating that the introduction of DINs be used as an opportunity to address director concerns around the current extent of personal information on the ASIC administered register.

We look forward to your support and input during the consultation process. If you require any further information or would like to participate in any future initiatives in this area please email Ms Kerry Hicks, Senior Policy Adviser (khicks@aicd.com.au).