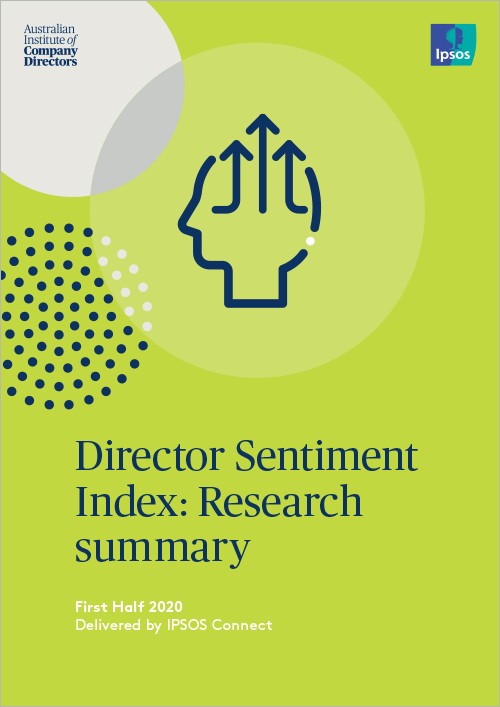 Sentiment has plummeted to its lowest level since the inception of the survey in 2011, with only two per cent of directors expecting the Australian economy to be strong in the coming year.

More than 1,000 directors were surveyed for the DSI (compiled by Ipsos) in mid-March, at a time when many businesses across Australia began shutting  their doors  and  COVID-19 cases  were  starting to climb.

The AICD’s  Chief Economist, Mark Thirlwell, said, “It’s important to note that our survey closed on  22 March, the day the government announced its second stimulus and well before the huge  JobKeeper  package was deployed. That was also before tens of thousands of Australians had been stood down.

“We’ve already seen policymakers deliver some radical measures to help keep the economy alive during the opening weeks of the current public health crisis, along with a range of creative initiatives from businesses and NGOs.  As  the  economic and financial fallout  continues  over the coming months, further innovative and decisive steps by governments and businesses will be needed.”

Global economic uncertainty was also mentioned significantly more often by directors in the current survey when compared to the second half of 2019.

“The government’s strategy of putting the economy into hibernation is intended to reduce the costs of  shuttered businesses and lost jobs which, as well as inflicting severe short-term pain, would  also wreak  lasting, long-term damage  on  our  economy and society.  By seeking to  mitigate these costs by as much as possible, the plan is to place us in a much better state for when the COVID-19 crisis has past,” Mr Thirlwell said.

“When we  do  begin  to see a thaw, the  policy focus  will need to shift  from keeping our economy on life support to full-scale rehabilitation and recovery.

“Directors’ messages  in the DSI  about  what they see as the longer-term policy priorities for Australia could then serve as an important input into the new set of measures that Canberra will then have to deploy.”