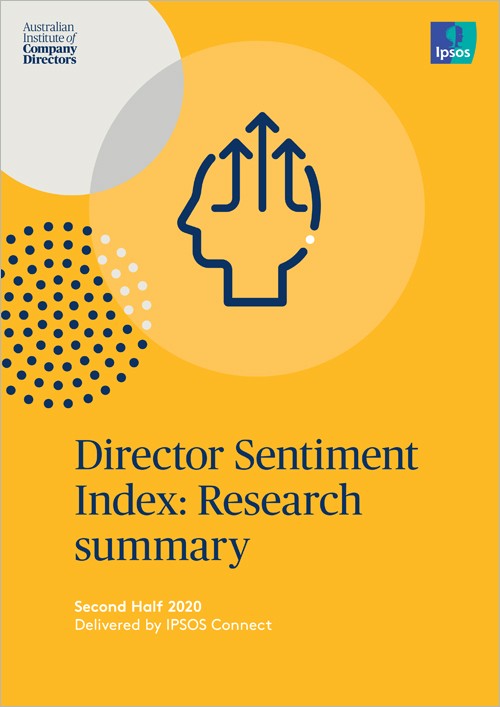 The latest Director Sentiment Index (DSI) has revealed a jump in director sentiment, despite the on-going economic uncertainty triggered by COVID-19.

More than 1,700 directors were surveyed for the DSI (compiled by Ipsos) in September, and while sentiment remains in pessimistic territory, it has climbed 22.4 points since the last survey in March to minus 37.2, even with ongoing restrictions and the historic debt and deficit announced by the Treasurer earlier this month.

AICD Managing Director and CEO Angus Armour said, “The challenges related to the pandemic will continue for some time, so it is encouraging to see that despite continued pessimism directors are seeing an improved outlook in some areas.

“The Government’s welcome decision to extend key relief measures has no doubt played a part in easing anxiety. This includes the JobKeeper scheme, changes to continuous disclosure rules and allowing virtual AGMs.”

“Earlier this year directors overwhelmingly favoured a radical policy reset to guide the recovery phase. This survey reveals that directors want a smarter, more innovative Australia that invests in infrastructure and a shift towards green energy,” Mr Armour said.

Directors have once again nominated climate change and energy policy as the policy priorities the Federal Government should address in both the short and long-term.

“The results serve as a reminder that notwithstanding the challenges of COVID-19, Australia still needs to address the political impasse that is climate and energy policy,” Mr Armour said.

Notably, the percentage of directors nominating Engagement with Asia as a priority for the Federal Government has increased significantly since the first half of this year.

China is the only major economic region where sentiment for the health of the economy over the next 12 months is in positive territory.

Other key findings include: